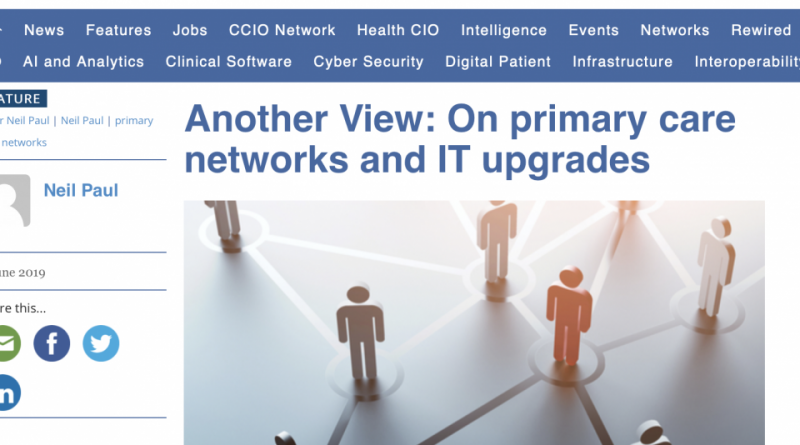 This column first appeared on 6.6.19 on digitalhealth.net See that website for comments to the article

What a difference a few weeks make. Since my last Digital Health column, almost every GP practice in the country will have become a member of a primary care network (PCN). It’s perhaps the biggest change in primary care since the NHS began.

Of course it’s all a bit bizarre. We have had to sign up to a contract naming our network but most of the detail is missing. For example, the standard data sharing agreement that all practices are meant to sign isn’t yet written – and I’m sure some won’t like it when it is.

The rules state that, in theory, any patient in any practice should be able to be consulted by any clinician in any of the network practices. While we now have some tools to do this – for example, EMIS remote consult which we use locally – they’re not perfect yet by any means. Most are currently practice based, which means analysing data at network level is difficult.

Building business intelligence across a network

I’ve been speaking to a couple of relevant companies to push the PCN business intelligence agenda. In particular I’ve been working with the people who make the Apex tool. They have a wealth of practice level data extracted from clinical systems, and we’re discussing how to cut this so it’s fit for networks.

Another change to report since my last column is that we have had a needed and long overdue hardware refresh at my surgery. New small form factor PCs have been installed, all running Windows 10. It wasn’t that long ago we were on XP, then Windows 7.

Windows 10 seems fine – some felt it was going to be a pain. It’s much more stable and reliable, though perhaps that’s because we have moved onto a modern active directory server. It now takes about 30 seconds to boot to the log on screen. This is amazing as it was taking up to eight minutes, a real pain if you were running late, even worse if the computer crashed.

EMIS and other software still takes a while to load but appear more stable – I actually haven’t had to reboot in the last couple of weeks.

Most staff have been offered either new larger screens that switch to portrait mode if needed or have gone with second screens. It’s odd – I’m not mad keen on a second screen but love a big one. Others like having EMIS on one and Docman on the other. Portrait mode is quite useful for letters as it means you can read the whole document without flicking up and down constantly.

A clean install of all software has obviously helped. Machines appear to have most of the apps needed. You can apply for more, but there is no doubt the machines are locked down. One of my apps isn’t being allowed to update itself at the moment until it’s cleared.

So the hardware is a lot better apart from the wifi which no one can currently get onto. What’s funny is we had two hours without power and for half an hour the only thing running, thanks to the uninterruptible power supply, were the phones and wifi.

But what if it were cutting edge?

My wife’s practice is still on the old system and she comes home every day moaning – they can’t roll it our fast enough. But I expect they haven’t gone anywhere near cutting edge kit. It makes you wonder how good it could be if we had proper investment in IT. I was chatting to a CBI (Confederation of British Industry) bod the other day who is a patient of mine and who knows I have an IT interest. He was quoting that most successful businesses spent around 10% of their turnover on IT. I’d love to know what the total IT spend is for my practice. I suspect it’s a lot less than that.

Our Internet link for non-N3 traffic has also just been upgraded and this appears to have made a big difference to services not going down N3. For example, sending dictations to Lexaxom cloud had been becoming a problem due to bandwidth issues.

It now seems better which is useful as we are hoping to get into phase 2 of our Lexacom project. We moved most of our local surgeries onto their cloud platform. Partly because it came at a discount if we went in bulk, partly as it would simplify installation training and support for everyone to be on same system. We also thought it might make locums’ lives easier and therefore make working in our practices more attractive.

However part of the idea was to take advantage of their cloud and the promise of enterprise working. Medical secretaries are a vital part of the team. When one goes on holiday, or is away on maternity of sickness leave, it can be a nightmare to replace them. Unless they have genuine primary care experience, most agency secretaries really struggle unless and it often takes time to train and support them – sometimes more than if you hadn’t had them.

For me, typing is not the most important thing secretaries do. And so we’ve been looking at how to reduce this burden to give them more time to spend on the more valuable stuff.

Speech recognition appears to be selective and difficult to master. We have tried it and some of my partners appear to be 100% recognised. I can vary between high 90s and low 30s. The problem is once recognition drops it’s almost easier to type the letter from scratch than correct it, even with extensive training.

You can outsource your typing to Lexacom’s typists, who do a good job. I’m trying to work out how cost effective it is and whether I should just replace a typist with their service. They charge per whole minute which can be a pain for a 1m 5sec letter but I’m keen to work out on average would I be better outsourcing. They appear to have almost infinite capacity and a quick turnaround and good accuracy. The main issue is while they type the letter they don’t choose and book it. So this still needs to be done in-house. Now this could in theory be done by a non-secretary which might be cheaper but again I haven’t costed this.

Does an IT aware admin person and a service replace a secretary and save money or support better or more work? I need to figure this out. Factor in holiday sickness, pension costs, and productivity versus speed and is it cheaper? It could be a model of working at scale.

However there is another way. Use your neighbour. Is every secretary working flat out all the time? By pooling typists can primary care networks cope with holiday, sickness and the like? Could a group of practices banding together agree a common standard and collectively work to meet it? All letters to be typed within 48 hours for example? This would reduce variation, something I believe the primary care networks were set up to deliver.

The problem is VAT. Does this count as a service? A non-medical VAT-able service? Some practices are VAT registered. Some aren’t, though providing a lot of VATable services might tip them over the edge.

Could we barter? I do 10 for you – you do 15 for me, then I owe five and I only pay for these? Could a GP federation provide typing services as a perk of membership? At big enough scale variations in amount of typing might settle out and no charge need to be levied from the federation to the practice for this service. Could a local hospital provide this service?

This applies to reception, coding, notes summarising. A lot of the primary care network documentation talks about helping practices survive – it would be a shame to miss out on some of these economies of scale and the only winners be the accountants and the taxman. 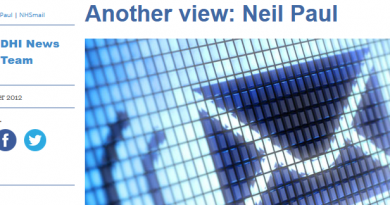 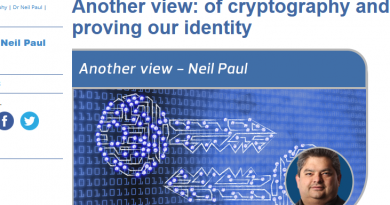 Cryptography and Proving our Identity 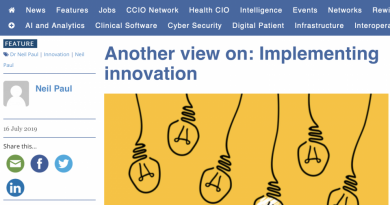