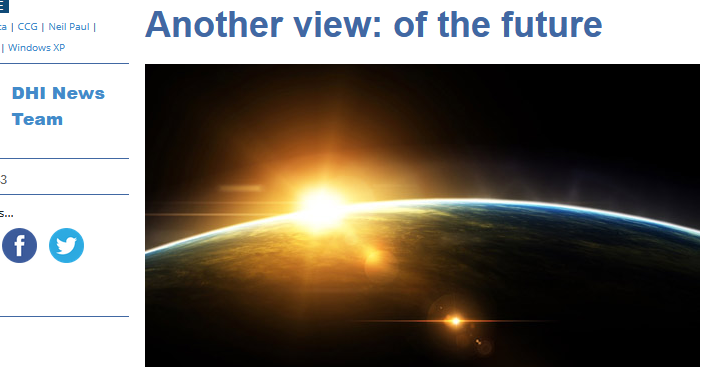 This article first appeared on 9.7.13 on digitalhealth.net.

At recent interviews for an IT manager for our clinical commissioning group, we asked candidates to forecast where health IT strategy might be going.

We asked them to horizon-scan new technologies and predict what issues would be facing us as a CCG. We got a lot of interesting answers.

Most candidates said they felt there was no overall strategy anymore, but then – correctly in my view – went on to say that the direction of travel is all about IT contributing to productivity savings, either in their own right or to support clinical initiatives.

Several picked the need to upgrade hardware and to deal with the Windows XP legacy as big issues that would have to be faced sooner rather than later, with upgrades to the Office suite as a linked issue.

Back on the bigger picture, most candidates talked about interoperability and getting the right information in front of the clinician. However, none gave great examples of why we need to do this.

Most just rolled out the “need to know your allergies in A&E” line, but I would have liked to hear about pathway costing and benchmarking – and, in particular, being able to compare one provider to another.

I would have liked to hear about being able to analyse the whole of care, not just prescribing, and being able to work out which interventions are effective and which aren’t.

A question that has always puzzled me is the cost effectiveness of blood pressure treatments. For example, even in class – say ACE-inhibitors – why do I prescribe one over another?

Habit? Drug marketing? EBM? Local guidance? Policy? Surely from our computer systems I should be able to work out by ACE-inhibitor which one works best, both in terms of the endpoint of blood pressure and the primary end points of mortality and morbidity.

OK, there will be a lot of other factors. But with an entire population’s data to analyse, might we be able to work out which drugs are the most cost effective at lowering blood pressure? I suspect some do almost nothing.

Nor did any of our candidates talk about breaking down the barriers between practices and secondary care, so we can deal with some diseases more effectively, and ensure that need is met equally.

People talked about freeing up the data. But nobody talked about better ways of inputting the data or about bespoke user interfaces.

What are the real telehealth challenges?

One thing our candidates did mention was mobile working for community staff. In fact, almost all of them saw it as a huge potential win, which is great.

A few went on to talk about apps, smartphones and telehealth. Alas, we didn’t have time to get into a debate on whether the NHS can afford telehealth, whether telehealth interventions really save money, and whether this is area in which there is more hype than substance.

I suspect that consumer products will push us in a telehealth direction. As phones and wearable devices get smarter and more linked to each other, and as the cost of monitoring devices falls, I think people will buy their own kit.

I don’t think the NHS will provide it; the health service will be just asked to interpret it. Most of these machines will be set to never ignore any sign of potential concern – they will ask for medical help as a default.

So we need to think about receiving APIs; or how we are going to deal with this huge amount of incoming data?

As a GP, I have 50 letters a day, often 50 blood results a day, and loads of other stuff to process prescriptions, reports and so on, and so forth.

I don’t want every one of my patients who have bought home care devices sending me urgent emails every time they have an ectopic beat because they have had too much coffee.

Several interviewees talked about accessing notes from anywhere. But nobody talked about online consultations – even though any mention of this idea always makes for big headlines in the press.

Some might be trivial, one minute updates on how someone feels on a new medication. Some might start “I’m feeling suicidal and what are you going to do about it, doctor?”

I’m not sure our appointment systems are set up to cope. At the moment, they are set up for bog standard, ten minute appointments – and there’s not much attempt to triage what comes through the door.

I think we need some sort of filtering of reasons why people want to talk. This might include some sort of expert system that could then allocate slots of variable time lengths. That way, we might have more chance of not running fast then slow.

Facing up to the market and information downloads (overload?)

Another point that – I think – was missed by the candidates is that once you can access a patient’s information from anywhere, and you are publishing data on providers from all over, you are really opening up the choice market.

This is going to have big implications for CCGs. After all, it will mean that patients will be deciding where to go for treatment, not them. Yet CCGs are, by their nature, geographically based.

I was at a Nuffield Trust conference on predictive risk at the start of this week and, in passing, the new GP Extraction Service was mentioned.

This is going to suck data out of practice systems for various reasons, not least so it can be piped into the new care.data service, which wants to link all sorts of new data sets to the existing Hospital Episode Statistics.

The data sets that NHS England is talking about pulling out of GP systems are huge, and the whole idea of care.data is – quite rightly – worrying people.

But one thing that really struck me at the conference was that NHS England wants patients to be able to extract their own dataset and share it with people. The speaker suggested, for example, they might send it off to experts to analyse.

This struck me as worrying. Who are these experts? What is their agenda? What if they don’t follow local prescribing guidance? What they turn out to be a drug company trying to push its wares over a better alternative?

Are international boundaries going to be respected? Or is some American company going to be telling me what to do with my patients, with no knowledge of what’s available locally?

I’m not even sure our data quality is good enough for this. At the very least, we need to think about investing in data quality at all levels if this is what we want.

Have I recorded why that drug was stopped? Has every investigation and result been Read coded? Or am I going to get loads of queries from “experts” as to why have I done X not Y?

There is a potential to raise standards, but also to create work. So yes, we need to sort out Windows XP. But we also need to start thinking about the bigger picture, and how IT can support us as technology makes our lives harder, as well as easier, in the future. 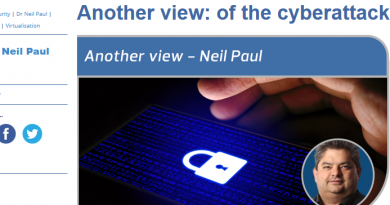 Another View: of the Cyberattack