This article first appeared on 2.3.15 on digitalhealth.net.

In last month’s column, I suggested that we should give every nurse in the country an iPad or other tablet computer, and load them up with administrative and clinical apps.

In a response to one of the comments that the piece provoked, I jokingly mentioned that I thought it was funny that the clinicians replying to my idea were saying: “Yes, get on and do it – we desperately need more tools to help us work more efficiently.”

Meantime, the IT people replying were pointing out how difficult it was to do anything. Once I’d posted that comment, it was interesting how many of the subsequent commenters agreed with me.

Basically, they said they couldn’t understand what I’m now calling the implementation gap. I’m defining this as the difference between what looks like a really simple idea that would bring small to large benefits and what can be done, or what gets done, in practice.

Let’s face it, many people use tablets at home already. But somehow, when it comes to work, NHS IT gets in the way.

I’m not sure I would have thought much more about this except that the very next day I was at a joint provider meeting. Each of the providers was encouraged to moan about, sorry discuss, their biggest issues.

One of the local mental health trust consultants complained that the clinical commissioning group had put a CQUIN (quality payment) into a contract, requiring the trust to let a GP know within a day of any changes to a patient’s medication.

The idea was to reduce the clinical risk to the GPs; but no one was giving her an up to date list of the patient’s medication from the GP system.

She felt this put her at increased clinical risk and she didn’t want to be grilled in coroner’s court about drug errors. Couldn’t we do something about it?

I replied that she could quite easily get a list of current medication; hadn’t she come across EPR viewer from Emis?

All the practices in my CCG and in the neighbouring one use Emis Web, and the vast majority of the GPs in the other two CCGs near us are on the system as well.  So most of the records of the patients she is seeing could be displayed live to her.

She wouldn’t believe me. “The IT people say it’s impossible,” she said. I went on to explain we have done this for our local urgent care centre – the local A&E department. Even the local diabetes consultant uses it.

“OK,” I said, “it will take a week to get the data sharing agreements signed – and we might just need a meeting about consent issues – but we’ve done that enough times now that we are old hands at it.

“I’m sure you could have it in your clinic next week if we really tried hard. It would reduce your risk, it would improve the care of your patients.”

Do you think it’s happened? Of course it hasn’t. She believed for a second; but has no doubt gone back to a world of tenders/ bids/ IG Toolkits and who knows how many people saying it can’t be done when we all know it could be. It’s a month later – nothing has changed.

Remote access. Easier when the IT was, in theory, worse

This happens over and over again. The other day one of our new salaried docs moaned to me about trying to set-up remote access. He’s really keen to check his results on his days out of the practice so that when he gets in he doesn’t have a huge pile of stuff to do.

When I moved into the area my surgery computer system was ESP32.  When I did on call from home on a Saturday, I used to press a button on my home computer. It dialled the surgery line, it asked me for a code from my token, and then it rang me back, to a predetermined phone number.

I was then connected as another terminal on the network and, with the software installed on my PC, I could sit at home and consult and do everything I could normally do from my study.

Then we moved to Emis and went onto a primary care trust COIN network. We had to use Cisco VPN to connect to the network from home, which worked most of the time.

We then had to use the oldest ever version of Citrix to connect to a Citrix server that occasionally worked. It always seemed flaky, and you couldn’t easily get it to allow several apps to interact with each other as you could at work.

For a while, I was also bought a lot of bottles of wine as colleagues turned up at my house with their MacBooks so I could set them up and give them instructions. The ICT department, with one exception, seemed scared of Macs in general.

When Emis Web came along, I don’t think remote access worked for ages. So someone had the bright idea of using a “back to my desk” type app to connect to their desktops.

Of course, the security police didn’t like this. And, worse, you had to leave a machine on and free. Usually, the machine you wanted was being used in your absence – so this work around didn’t work.

The local chair of the CCG tells me he got it to work – just – by using a dedicated laptop set aside just for this purpose.

So it took me by surprise then when I got an account on the University of Liverpool computer system (I’m about to be made an honorary senior lecturer!)

I was given a username and password. I logged on from home, filled in some details, and downloaded the latest Citrix client to my Mac from their site.

And – hey presto! – I was on their shared desktop using all their apps without any problems on my Mac. It just worked. Which leaves me wondering are university IT departments better than NHS ones?

Frankly, I can’t see why, if Emis is on a central server accessible on the internet, I can’t just fire up a browser and access it from any device with a security token and/or smartcard.

But perhaps that’s a different point. If someone could explain why implementation gap exists to me – it can’t just be PID – let me know. 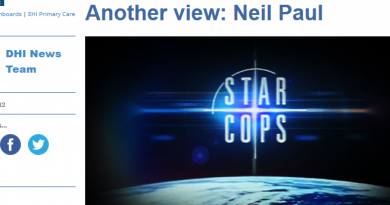 Learning from our mistakes – April’s Column for Digitalhealth.net