This article first appeared on 8.9.09 on digitalhealth.net.

Swine flu complicated our IT lives this summer, and our lift being out of order for a week complicated them even more.

All our doctors normally work upstairs, but we had to commandeer two rooms downstairs for the duration; one at one end of the building for the lepers that were the flu sufferers, and one at the other end for patients who couldn’t walk upstairs.

We decided early on to put our most senior and experienced (that is the oldest and hopefully most immune) doctor on flu duties, and he set up in the one room without any problems. However, any one of the other 15 of us could be called down at a moment’s notice to see someone in the other room.

It would be nice if we had all had laptops to carry around, but we don’t. Instead, having first been drilled in security, we resorted to trying to log in and out of the machine in the room every time we wanted to use it. This drove us all mad, as it could easily take eight minutes for it to log on. Out in reception, queues developed.

We then discussed alternatives. One was using the Citrix system that the primary care trust uses. Although it is meant to be used from outside the PCT network, using a virtual private network we could have left the machine logged into a receptionist’s account and accessed the virtual desktop.

I was keen on this system, as I’m used to it – I often spend my time in meetings logged on. But not everybody is as used to it as I am, and it’s true that the programs don’t link as they do on a desktop.

We then wondered if we could use VNC (virtual network computing: a desktop sharing system). Our PCT IT department has a freeware VNC server installed on every machine, so the helpdesk can access them to provide support.

We thought it might be quite good for the doctor using the room to VNC onto his own machine and just keep using it like he was in his room. Unfortunately, this wasn’t quick to sort out and IT weren’t keen on giving out the password – presumably because it would have meant that we could take over any machine on the network.

However, I think this is something we will look into in the future, because the need for this kind of remote working happens more than you might think. I daily get called to a treatment room to see someone and end up having to use the system as the nurse has it set up and not as I do.

Then, I seemed to remember that Windows XP has a remote desktop feature built into it. Couldn’t this be used? Users already have an individual password on their account, so couldn’t they use this to control their machine from another room?

What we settled on was having the machine we shared turned on and logged into a reception account with EMIS and Frontdesk and Docman all up and running and EMIS left at the ‘change user’ screen. This meant audit trails were right for the doctor entering the data – but it didn’t feel normal having everything else logged in under someone else’s name.

I’ve been a keen advocate of single sign-on, but I’m now keen to make sure that this is thought through. If it’s all tied to my smartcard and I have to pull it out of my room’s machine to go downstairs to put it in a different machine to get that to work, that process needs to be fast and everything needs to come on super fast.

And while we may need single sign-on for main desktop, I like the idea of being able to access it from other workstations.

On the subject of making my life easier I’ve recently found myself doing the same thing over and over again in several situations in different programs. EMIS LV has a macro function built in that can be very useful at times – it allows you to record some keystrokes and have these assigned to keys.

I really hope EMIS does something similar in its new system, as it can be a real time saver. When I look at my blood results, I have several macros setup that make life easy.

When I get an abnormal result, I email reception to ask the patient to come in to discuss it, and I have a routine email and an urgent one. To type these in every time would be a real pain. I also have a macro to change the user if a result isn’t mine and change it to the person whose result it is.

When I am reading my letters, however, there is no easy way of doing the same thing; which is slow and frustrating. Should I just install macros express – or would it be possible to encourage all software suppliers to the NHS to enable a scripting frontend to their software?

I reckon this would enhance user interface functionality and make it easy for people to share scripts across a network or from one site to another. 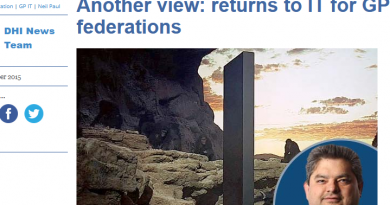 Return to IT for GP Federations