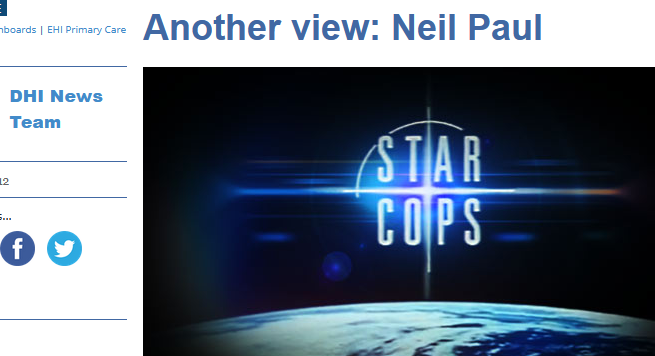 This article first appeared on 3.4.12 on digitalhealth.net.

Did you ever watch Star Cops in the late 80s? I don’t really remember any of the plots; just that it involved a policeman solving crimes on the moon accompanied by his amazing PDA.

He would simply talk to this marvellous device and it would wirelessly access loads of other computers and databases and find out things for him, drawing conclusions and unearthing clues based on very little input.

I’m pretty certain that this led me to buy a Psion and numerous other PDAs since, most of which haven’t lived up to the dream. It wasn’t until a few months ago, when Apple demoed Siri, that the fantasy almost became reality.

Alas, while you can talk to Siri and it understands some of what you want, we still have a long way to go in terms of gadgets presenting data back to us in an intelligent form.

I’ve been looking at a lot of data recently. Information is king, apparently. At least, that’s what I keep being told, usually in meetings at which people bandy about pieces of data like they are cards at a poker table.

People play a tight game and keep their data to themselves. They either give you the headline figure or share an Excel spreadsheet that makes no sense – or never quite shows the data you are wanting.

Even your own data can be in the wrong format. To check on GP admissions, I checked our local data portal, which was put together by the informatics team.

I found an excellent series of tables and charts looking at GP admissions. But they only showed information by practice, not by locality or by clinical commissioning group. So I couldn’t easily match what we were being told with what was happening.

During some recent meetings, the local hospital offered to give us live figures on admissions by practice per 1,000 patients. This is great; but I worry what figures are they using for list size?

Given that the hospital has written to a GP at my surgery who retired 14 years ago, I also wonder how up to date are those figures going to be. And I worry about the definitions used.

Talking the same language. Or not

My primary care colleagues and I think GP admissions are when a GP admits someone. However, the hospital seems to use this phrase for everything other than an A&E walk in; which includes urgent care centre admissions, out-of-hours admissions, and walk in centre admissions.

Trying to feedback to the troops and get them motivated is difficult if we don’t know where the potential problem is coming from.

I’ve seen a draft of an about-to-be-published Audit Commission report that estimates that millions of pounds every year is wasted collecting and analysing this not-quite-matching data.

I’ve a couple of ideas for improvements.

Once we have got the data, how do we analyse it? Although Excel is amazing and I’m one of those who think that pivot tables are one of the great wonders of the world, I worry that we spend too much time in Excel and there must be something better.

I sometimes think that what I need to do is drop all this data into a database and set-up some relational links. But the last time I used those in anger was when Star Cops was on. I used the DOS-based Borland paradox and it wouldn’t solve my question, just give me the answers problem.

I know there are several companies out there who have dashboard or data products. A lot of them seem to be just another way of presenting Secondary Uses Service data, although some now say they can link to other sources.

The companies vary in their willingness to build custom reports, but none so far have blown me away. Perhaps I need to invest more time in learning them – although this is difficult to do without purchasing them. Perhaps we need more exemplar sites?

Linking things up is going to be more and more important. For example, in the case of admissions though our local A&E department, we are looking at things like seasonal variation and have a reasonable predictor tool.

But I wonder if an up surge can be predicted from a rise in cases seen in primary care a few days earlier. I feel in my bones that it should be, yet I know no easy way of collecting this information across a patch or linking it in with the data on primary care appointment systems.

Also, no doubt, the weather has an effect and I would have thought we could pull in something from the Met Office. What about the M6? Signs tell you the driving time from one junction to another; could this data be analysed and fed in?

I’m sure there are loads of other possibly connected pieces of info. I’d be interested in hearing of any mash ups you have come across or which data analysis products you find particularly useful. Of course presenting the data back is important, and if you haven’t seen www.informationisbeautiful.net take a look. 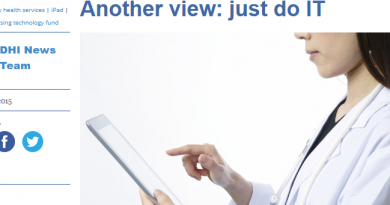 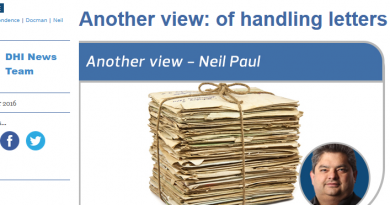 Another View: of Handling Letters 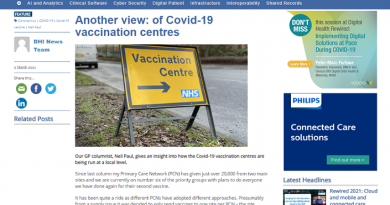 Another view: of Covid-19 vaccination centres